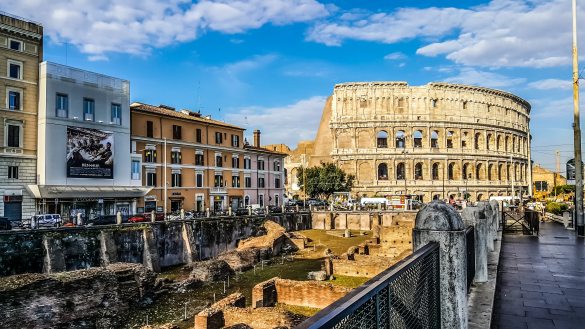 Historically, women have been discriminated against and have held lower social positions than their male counterpoints. This is no exception in Ancient Rome as women were both exploited and molested at the hands of their husbands and even their parents. Due to the belief that women were weak and “light-minded”, Roman laws were put in place so that women would always be under the authority of a male figure. However, despite the prevalence of rape, the principal of manus, and harsh governmental laws, women practiced agency through emancipation, divorce, and religion.

The concept of manus is key to understanding the structure and social construct of ancient Rome. Manus refers to a man’s control over a woman in Roman society. This first begins when a woman is born in which they are under the control of their fathers until they are married. The pater familias, or the head of the family who is the source of the manus or control, must sign for their daughter or wife in all contracts and legal documents. In addition, if a woman desired a divorce, she needed the approval of her father in order to do so unless she was emancipated from manus which will be discussed later (Pomeroy 157). The concept of manus and pater familias also gave fathers the right to execute their daughters or any member of their family if they had committed crimes such as adultery which under Augustus, was made a crime only of women (Pomeroy 158). This type of crime caused great moral strain on the women’s entire family and is demonstrated by Suetonius when he describes Augustus’ reaction to his daughter’s indiscretions. He asserts that after Augustus “found out his daughter was having an affair, he refused visitors while he may have contemplated killing her” (Suetonius 80). Instead of death, Augustus exiled her and refused her “to drink wine or to enjoy any other luxury (including) male company” (Suetonius 81). Further, the law in ancient Rome provided that a husband was obligated to divorce an adulterous wife, but there was no such law that required women to divorce an unfaithful husband. If women sought a divorce, she needed to obtain permission from the pater familias. The only exception to this was if she was considered emancipated from manus which became possible under the reign of Augustus after a woman had borne the required, three or more children (Pomeroy 151).

Despite the harsh laws and punishments for women, this hostile attitude toward adultery was not equally reciprocated for men. In fact, men were encouraged to have multiple sexual partners outside of marriage. Augustus himself had multiple consorts which were justified by claiming they were done “for reasons of state, in order to discover who his enemies were by getting intimate with their wives” (82). This justification could be argued improbable as Augustus stole his wife Livia away from her current husband, Tiberius Nero when she was six months pregnant, proving that not all affairs were done for the “good of the state” (Suetonius 107). Like Augustus, his uncle Julius Caesar had affairs with women that were “numerous and extravagant,” many of which were with wives of prominent Roman men (24). Augustus and Caesar were certainly not the only Emperors to pursue married women as Suetonius asserts that once Nero grew tired of “seducing freeborn boys and married women, Nero raped the Vestal Virgin Rubria” (221). This proved that even the purest of women and boys were not off limits to powerful Roman men and provided an opportunity for men to have unlimited sexual experiences, whether consensual or not.

The prevalence of rape in Ancient Rome caused many problems for the victims of these crimes. As women were expected to stay pure and chaste until marriage and then remain faithful to their husbands, even if a woman was raped it was assumed that she received some kind of pleasure from it. This meant that women could face execution if it was perceived that she didn’t do enough to stop or prevent rape. Even if women were to scream for help and lobby the assistance of a neighbor, although receiving a much lighter consequence, she would still be punished (Pomeroy 39). Further, state-owned brothels and prostitution were commonplace in Ancient Rome. During the reign of Caligula, Suetonius describes him as “never missing a chance of making profits” and goes on to describe the brothel he owned and operated in which he asserts that “he decorated them worthily, stocked it with married women and boys, and then sent his pages around the squares and public places, inviting all men, of whatever age, to come and enjoy themselves” (Suetonius 167). Not only was adultery by men encouraged, but often times the wives of Roman men were traded and used by both their husbands and Roman rulers.

In ancient Rome, a respectable women’s purpose was to bear children to ensure Roman heirs for their husbands. According to Suetonius, Caligula would “parade (his wife) naked for his friends” but refused to acknowledge his marriage until after she bore him a child “whereupon he announced the marriage and the birth simultaneously” (159). This clearly demonstrates the importance of heirs to legitimize a marriage while also highlighting the use of women for entertainment and to exhibit status. In the case of Augustus, even as Livia was his one true love, the union with Livia “proved childless, apart from a premature birth” and Augustus eventually remarried (Suetonius 78). The importance of childbearing was one so dire that Roman law was enacted to regulate it. Under Augustus’ reign, policies were implemented to ensure procreation among Roman citizens and penalties for unmarried and childlessness citizens were enforced at twenty years of age for women and at twenty-five for men (Pomeroy 166). These penalties were escaped by Roman men by marrying girls who had not yet reached child-bearing age. In this way, men could enjoy all of the social and economic benefits of married life without the responsibility of raising children. This was not the case for women who were not permitted to engage in such a marriage with a prepubescent male (Pomeroy 166).

Although many of Roman laws and social practices demeaned and limited women in relationships and otherwise, women also had various outlets for agency such as engaging in certain kinds of marriage contracts, religion, and taking advantage of opportunities for emancipation. Despite the stigma surrounding divorce today, divorce and remarriage were common in ancient Rome. Even as there were strict rules on adultery if the marriage was annulled both parties were free and required to remarry and produce more children with their new spouses. This included women who had lost their husbands in war and under the reign of Augustus, “widows were given a three year grace period before they were expected to remarry” (63). This was done to ensure that the Roman population continued to grow and encouraged family life and relations. However, marriage was not typically partaken in for love but rather for a contract to cohabitate and three different marriage options offered more autonomy and freedom to women (Pomeroy 154). This being especially true with the use of marriage without manus which provided the most freedom as brides who participated in these types of marriages continued to be under the control of their pater familias, most times their father or close male relative, rather than their husband. This offered increased freedoms as the father of the bride did not live in the same household. This also gave the bride’s family control over her estate and other family matters so that family owned property and wealth could remain with her (Pomeroy 155).

In addition, women were key actors in religion and spent a multitude of time working within religious cults. In this way, respectable Roman women were able to escape the home and socialize with other Roman citizens. This created an opportunity for women to influence all aspects of Roman society including politics, in which women were not allowed to participate. The most important and respected religious role women could take on was that of the Vestal Virgin. The Vestal Virgin’s lived in the House of Vestals, tended to the church and were required to stay chaste for thirty years in which they could marry after their allotted service period was up (Pomeroy 211). They were allowed to attend certain events and enjoyed amenities that common women did not. Under Augustus, they were even given special seating at Gladiatorial shows while other women were confined to the back rows (Suetonius 70). In addition, Vestal Virgins were allowed to vote, own property, and write, all of which were not allowed of common Roman women (Pomeroy 211). However, Vestal Virgins were chosen from a young age and were usually from prominent Roman families. For respectable women, religion was a way to gather, converse, and exchange ideas and information outside of the home. In addition, women who were the family of rulers may have had similar influences on political and social decisions and policies. Ruler’s affections for their wives and mistresses can be seen throughout Suetonius’ account of ancient Rome. Julius Caesar was known to give his lover Servilia lavish gifts including “a pearl worth six million sesterces” and “knocking down certain valuable estates to her at public auction” (24). This providing evidence that women used their influence on Roman leaders to their benefit. It can also be assumed that through these women, leaders may have been persuaded to make decisions based on the wishes of their significant others. This could also be true for common, respectable women who stayed in the home. Through the use of both their participation in religion and through the power of suggestion, it is quite probable that honorable Roman women were able to influence both their political and social environments through their husbands.

In conclusion, despite the fact that women in Ancient Rome faced many hardships and misgivings, they still used agency to better their social positions and influence. Through the use of marriage without manus, emancipation, and involvement in religion, women were able to get around some of the traditional Roman laws to create more autonomy and control for themselves over their social, legal, and economic affairs. The use of divorce as a tool to terminate an unwanted marriage created an opportunity for women to get out from under their husband’s control and venture out again to find a new suiter. In these ways, women were able to make a better life for themselves in the sometimes unforgiving environment of Ancient Rome.

Ashley Simpson is a Ph.D. candidate of American history at the University of Missouri at Columbia, per course American history instructor at Missouri State University, Ozarks Technical Community College, and Drury University, in Springfield, Missouri, part-time service desk and research assistant at Ozarks Technical Community College, Richwood Valley Campus, Drury Univerisity's 2018 winner of the Drury Award for best original research project in undergraduate history, and Greene County Historical Society's 2018 and 2019 recipient of the GCHS Research Fellowship. She plans to continue to pursue her doctoral degree in American history with specialties in medical history. She is the mother of two small boys and step-mom to two beautiful girls. View all posts by Webster

This site uses Akismet to reduce spam. Learn how your comment data is processed.